Amazing eczema before and afters! 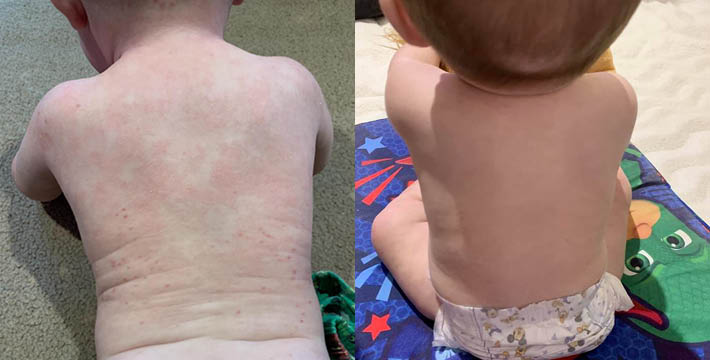 20 Oct Amazing eczema before and afters!

Posted at 09:21h in Uncategorized by Mel Cadman

For eczema and skin allergy sufferers the itch is real, especially in spring time! Up to 50 per cent of Australians have revealed that their eczema gets worse in Spring and now we know why.

According to Eczema Association of Australasia, eczema flares up more in spring due to the added allergies in the air and the rise in temperature. Heat is a factor because people with eczema get a lot hotter and the release of all the allergies into the air from grass and flowers can further irritable affected skin.

Very little is actually known about eczema, apart from the fact that it is an inflammation of the skin, meaning it’s extremely hard to know what causes it. Usually there’s a genetic component, like some sort of allergy disease in your family, and often it’s caused by coming into contact with things that irritate the skin, both internally or externally.

For most people, the skin erupts in flares and can lead to really intense itchiness, which causes you to scratch which can increase the risk of getting an infection. Unfortunately, there is no cure for eczema, just management.

So what can you do to stop the itch? Salt therapy!!

Exposure to dry salt improves your skin’s good bacteria, while stimulating cell regeneration and exfoliation. This can help ease eczema and psoriasis. Salt therapy is also anti-inflammatory and antibacterial. Combined, these qualities can offer real relief for red, itchy and flaky skin. As salt therapy is natural, it’s perfect for toddlers and babies with sensitive skin.

With regular salt therapy over several weeks, many of our client’s experience relief from their eczema. Some of our avid clients even witness their skin completely clearing, reporting dramatic changes in their visual appearance.

Here are some incredible before and after testimonials:

“Less than a week a go if someone was to tell me that a salt room would help Cruz so much, I probably would of laughed at them and certainly wouldn’t of believed them. 4 sessions later my miserable Cruz has turned into a happy little baby. A week ago he was miserable, grabbing and scratching at his skin and was covered in horrendous eczema. I had tried literally everything and was at my wits end and was at the stage I’d try anything, hence trying the salt room. Cruz now doesn’t grab or scratch at his body. It’s pretty much clear and he is such a different baby!” – Cruz

“I have had eczema since I was six months old. I was then prescribed topical steroids to apply as frequently as necessary – with no regard to overuse. Gradually I noticed it was getting worse and spreading to other parts of my body, also, this eczema looked different than usual. It was steroid-induced eczema and the only way to cure it was to go through topical steroid withdrawal (TSW). Healing time can be anywhere between nine months to three years. My mum discovered Salts of the Earth and we signed up to a management plan.
I personally believe that this has done my skin wonders! Within three months I was standing comfortably again and I could see that my body was slowly getting better. I feel like myself again and I truly believe I would not be this healed without the aid of my regular sessions of salt therapy at Salts of the Earth.” – Nicole

“Jake’s eczema was so bad he needed cold bandages on his skin. However, with consistent Salt Therapy and regular salt baths, in just three weeks it dramatically helped control his Eczema symptoms and cleared his skin. By continuing to have regular salt therapy sessions Jake’s skin remains clear and he no longer needs creams. Not only has it helped control his eczema, it has also helped Jake’s croup and hay fever.” – Andrew

What are you waiting for? Eczema relief awaits. Book in for your free consultation today.